(RNS) — The subjects were loaded: flags in the sanctuary of the church; separation of church and state.

Nine United Methodist pastors from South Carolina with differing political views recently met online with a facilitator to learn a set of techniques for speaking out about these polarizing political differences.

The sessions aimed to teach them to listen actively and demonstrate their understanding.

As each pastor spoke about their perspective on the subject, their peers took turns reflecting on what they had said in a practice intended to help the pastor feel understood.

It was harder than many in the group thought.

A pastor, trying to reframe a colleague’s point of view, remembered a small detail unrelated to the larger point. Another did what many pastors do – she added her own homiletical gloss to the argument. Yet another pastor admitted that he had stopped listening to the details of his fellow pastor’s position because he was already trying to formulate his own response.

Polarization divides American society, not only politically but socially, geographically, ideologically and religiously. Mistrust, contempt, even enmity are rising. United Methodists split over LGBTQ ordination and marriage. Jews are divided on their vision of Israel. Evangelicals are torn over restrictions on coronaviruses, vaccines, critical race theory or whether the 2020 election was stolen.

Reset the Table, an 8-year-old organization dedicated to creating meaningful dialogue across political divides, is trying to engage clergy and congregations — among other groups — in more productive discussions.

The group has no illusions about its ability to resolve conflict or foster agreement. His training sessions do not seek to produce consensus or even to find common ground. Participants are not expected to come away thinking differently about an issue.

On the contrary, the techniques they teach aim to allow profoundly different people to see themselves in all their humanity.

“Listening to those who disagree with us is an integral part of what it means to listen to God’s voice,” said Rabbi Melissa Weintraub, founding co-director of Resetting the Table. “We must courageously investigate our differences.”

Rabbi Melissa Weintraub, left, leads a Reset the Table discussion on Israel on May 15, 2018 in Miami, Florida. Photo by Michele Eve Sandberg

The organization has so far trained some 43,000 people in a carefully structured process that allows participants to listen, speak and challenge each other with respect. With funding from Steven Spielberg and Kate Capshaw’s Hearthland Foundation, he works not only with clergy and congregations, but also with entertainment industry workers, journalists and medical professionals. But his work among religious groups is particularly critical because these communities are among the last places where people with different worldviews congregate.

Weintraub has become an expert in disagreement. While completing her rabbinical degree from Jewish Theological Seminary, she co-founded Encounter, a Jewish organization that takes American Jews on trips to Bethlehem, East Jerusalem and Ramallah to meet Palestinians and better understand the Israeli-Palestinian conflict.

Reset the Table, his new venture, does much of his work in Jewish contexts. But with a staff of 11 and a network of facilitators, it has expanded its training to include clergy from other faith traditions, primarily Christian. (A short documentary about the group’s work in rural communities in Wisconsin and Iowa shows how the process works.)

The Reverend Robin Dease, pastor of St. Andrew by the Sea in Hilton Head, South Carolina, and former district superintendent of the state’s United Methodist Conference, said the tensions she perceives in her own denomination led her to propose the two sessions among her fellow clergy.

United Methodists are splitting, Dease said, and people are not engaging with each other.

“People are leaving suddenly without any conversation, without coming together to delve into the matter: theologically, spiritually, exegetically and socially. We don’t have the conversation,” Dease said.

Dease, who also sits on the denomination’s social justice arm, the General Council of Church and Society, had heard of Reset the Table and participated in an interfaith training session for clergy in the United States. southeast earlier this year. After her conclusion, she chose a group of fellow pastors — some liberal, some conservative — from her own denomination to deepen the practice.

A first session last month asked participants to talk about formative life experiences. He then asked the clergy to complete a survey of their beliefs, which the facilitator used to assess major areas of disagreement. During the next session, people with different opinions were grouped into small groups. 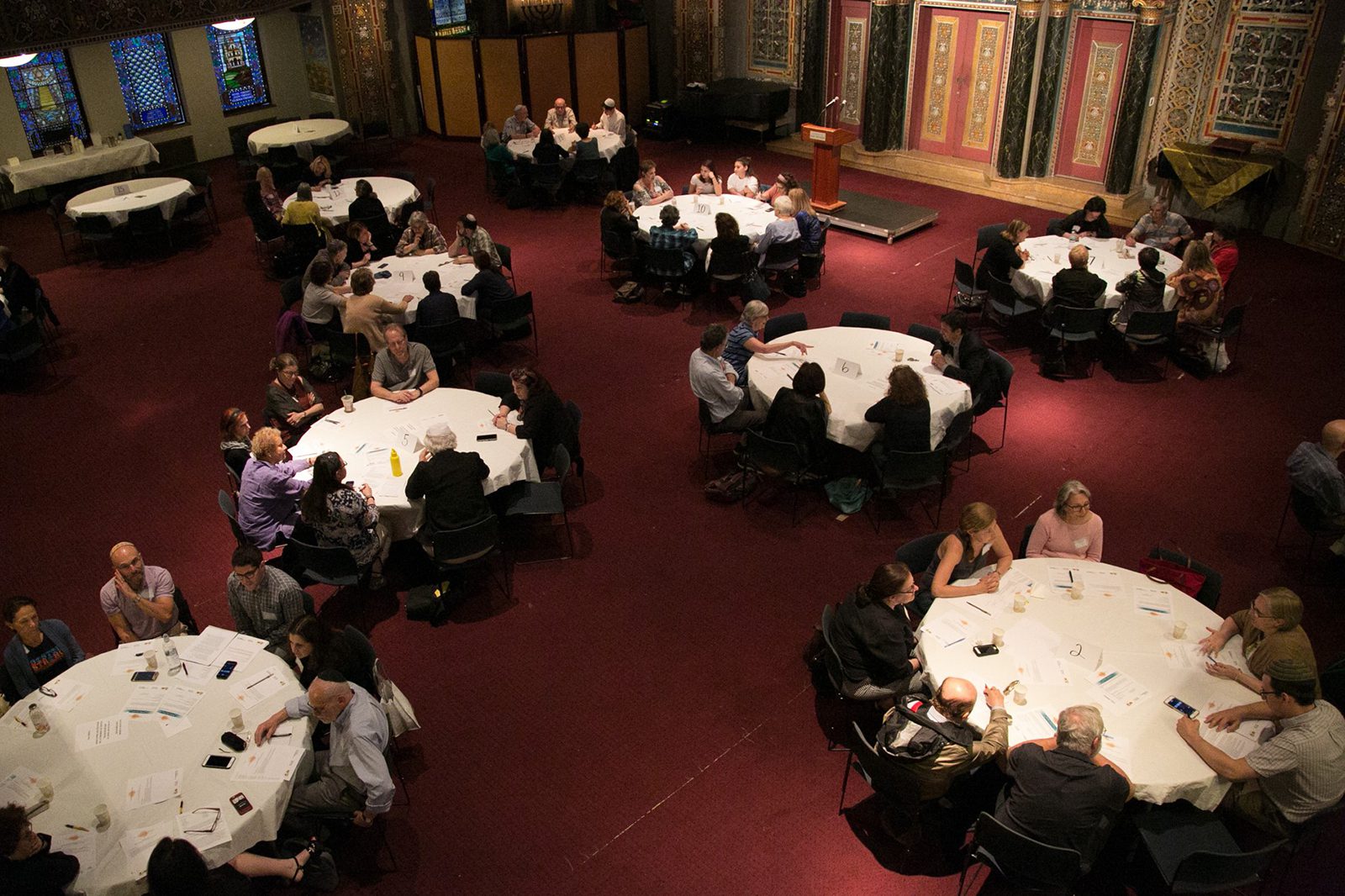 Table reset techniques are modeled after a practice known as “transformative mediation.” Unlike traditional mediation, which aims to resolve differences by arriving at mutually agreeable solutions, transformative mediation aims to give people the skills to see and understand each other’s point of view so that they are more willing to establish respectful relationships with each other.

The idea, said Eyal Rabinovitch, co-executive director of Resetting the Table, is to disarm the destructive powers of conflict.

“One of the greatest discoveries in the world of trauma therapy is that people themselves are most receptive when they are seen as they wish to be seen,” Rabinovitch said. “We want people to say, ‘Yes, that’s exactly me.’ It makes all the difference in producing receptivity.A lot of changes can happen in these times.

When differences emerge, participants are encouraged to slow down the conversation, pause their own reactions, and listen carefully. They are encouraged to look for “meaning signs”, words or phrases that convey particular passions. They are then asked to recount what they heard the speaker say and ask if their rephrasing is correct.

The training was powerful for an evangelical church in Lynchburg, Va., which signed up 15 members to participate in a series of trainings last April. Mosaic, a small church that meets in a shopping mall, had experienced disagreement over pandemic closures. Some members have left. Others harbored grudges for the church’s willingness to follow government-issued mandates that they felt were an attack on their freedoms.

“I was fascinated to learn that it was very easy for me on certain issues to have a very fixed view and not have a generous interpretation of what the other person believes,” said Ron Miller, a Mosaic Church elder who works as an online dean. for the School of Government at Liberty University. “The idea of ​​looking at the other side of the issue and interpreting it more generously is a game-changer if we apply it as a daily discipline.”

Miller is now working with Reset the Table to organize training for Lynchburg clergy this fall. He thinks the practices could also be helpful for Liberty University employees.

Rabinovitch acknowledged that clergy with large public platforms and a following that depends on their extreme positions are unlikely to want to participate because it requires a degree of vulnerability. But they say most people yearn to communicate better.

Jeff Nitz, an elder at Mosaic Church in Lynchburg, said the work may well save society from a growing cycle of mutual mistrust.

“It’s about getting closer to your neighbour,” he says. “We are not caricatures. We are real people. You can’t have that if you don’t listen to each other.

RELATED: How Christian nationalism paved the way for January 6

Sarcasm and humiliation have no place in education | Letters

Joan Bakewell’s response to a prominent tutor’s negative comments resonates strongly with me (A Moment That Changed Me: My Teacher Called My Homework Bullshit – And Totally Destroyed Me, September 8). As an undergraduate at a prestigious university in the mid-1950s, I also experienced scathing sarcasm from a professor. Unlike Joan, I didn’t have the […]

Teaching the Faith – Trap or Paradise

When I was 21, I was first exposed to faith teaching, and I liked what I heard. I had been seeking God for several years and had found real treasure in the Holy Spirit, but teaching faith helped me put ideas into place in a way that made sense of my many questions. He systematized […]

Teach the Bible as lit “with your hands on the threshold”

Teach the Bible as lit “with your hands on the threshold” By Walter Hesford For years I have taught the Bible as literature. It was a staple in the English department. It was believed that English majors should have some familiarity with the most widely read and influential book in Western literary tradition. The course […]